Yesterday, I spent the evening in Dubai, attempting to find fabric for a project I’m working on. I live in Al Ain, which is about 1-1.5 hours from Dubai, depending on how you drive and what part of the city you’re visiting. However, if you plan to travel to Dubai on a Friday evening after prayer, you’re in for a traffic treat. Because of such a high volume of traffic, unfamiliarity with the area and the confusing infrastructure of Dubai, our total commute time was around 3 hours. 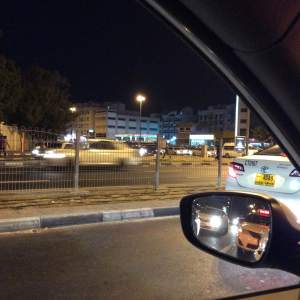 My friend Devin, her son Malcolm and my son Christion kept me company as we headed to a less modern neighborhood of Dubai called Deira, known as the commercial trading area due to its proximity to the Persian Gulf and Dubai Creek. Believe me, Dubai is not just tall fancy buildings. There are sections in Deira that aren’t visually appealing, however, it humbles the city greatly and tells a lot about its background story.

I was told by a friend that most textile souqs were in the area, which would have the fabric that I needed. We were able to find the fabric souqs but no parking! Yikes!

By this time, the kids were complaining about their overwhelming starvation and overdue potty breaks. So we ventured a bit away from the souq area in Deira, about 5 km away and found a convenient and FREE parking lot, might I add.

First, we attempted to go into a quiet, well lit office building to use their restrooms, only to find you needed a code to get in. 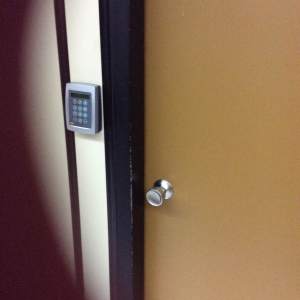 By this time, we were beyond frustrated so we walked down a bit to the Blue Radisson hotel. The staff was friendly and the restrooms were clean and spacious. After our much needed potty break, we went out to the front of the hotel to catch a taxi back to the souq area to look for food and fabric shops!

We informed the driver where we wanted to go and asked for suggestions on great local restaurants. You will definitely have your selection to choose from in Deira: Iranian, Asian, Nigerian, Pakistani, Indian, Lebanese….whatever food you want, it’s in Dubai. That’s why I love the culture in the city. There is so much diversity, different cultures, food and history all meshed together in this growing metropolis.

The taxi dropped us off at one of his favorite Indian restaurants. We were not a fan of their menu selections so we decided not to stay. Then, Devin spotted a Nigerian restaurant down the street. I was okay with this simply because I wanted to support black business, however, when we went in, the food appeared to have been sitting out for a few hours and wasn’t freshly cooked. Sigh. I was looking forward to some Nigerian food! A little ways ahead, I saw 14 August Restaurant. We decided to check it out.

It was a Pakistani restaurant filled with local Pakistani men.

We were definitely out of place, being the only black women with two small children in the entire restaurant…I’m just saying!  I can tell you this, we weren’t treated unfairly but it was clearly obvious that all eyes were directly on us.

Most of the wait staff couldn’t understand or speak English so we ended up with the guy in the blue plaid shirt in the background in the picture below. He became overly frustrated with us, especially since we changed our order a couple of times and asked a ton of questions. Hey, I have a kid with nut allergies so I had to know! Besides, we wanted what was good! 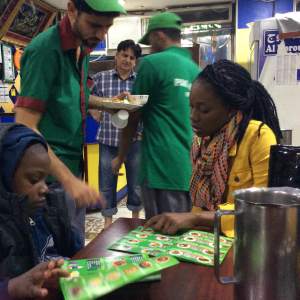 While we waited, you know we had to take a few shameless selfies and pictures with the kids.;-) 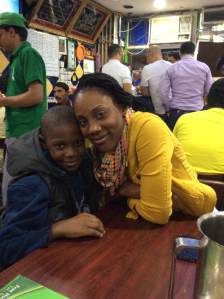 Finally, our food came. It was very tasty. I had the Butter Chicken with Naan bread and rice. Devin had some vegetable medley with rice. Unfortunately, a lot of Middle Eastern and Indian cuisine has spice in it so Christion wasn’t a fan. However, he helped me eat the enormous Naan bread though! Oh, and the food was very cheap. For my meal, I paid 24 AED, which is comparable to around $6. 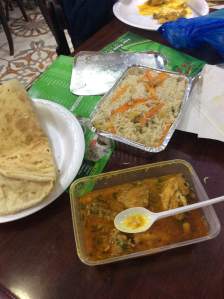 After we finalized our bill, and left expeditiously because we were definitely the outcast. It was a bit uncomfortable being in a local spot with all these local Pakistani men!

As you can see, Deira is bustling at night, full of people everywhere, open shops and copious amounts of traffic.

Okay so now we were ready to catch a taxi back to the car because we still needed to make the long 1 ½ hour drive back to Al Ain.

What was even more frustrating at this point was the lack of taxi drivers willing to stop for two black ladies. I hate to pull the race card but its true. The same taxi’s were stopping for the Muslim Egyptian/Syrian looking women in a heart beat.  We know they saw us…especially our color. Finally, I suggested that we get off the main road and go to a less busy street. The first cab driver stopped and gave us a ride.

Finally, we arrived to the parking lot, which was next to this cruise boat area. I am not sure of the name, but it reminded me of one of those day cruise boats that take you on a tour of the city.

So finally, we were on our way back to Al Ain. We arrived safe and sound with no problems.

Although my trip to Dubai wasn’t what I expected, it was good to expose the kids to another side of UAE culture. I enjoyed myself and was in good company so that’s all that matters at the end of the day.

Well, there you have it, always an adventure in the day and life of a Single, Black mother living life overseas in the UAE.

Until next time! Thank you for your visit!